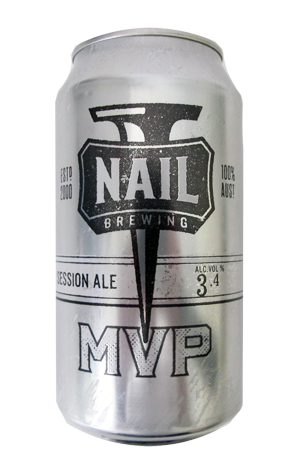 In the past few years, Nail Brewing has had something of a Midas touch when it comes to releasing quality beers when no one is looking that quickly define the brewery. The inaugural single batch Brew Log release was dedicated to a Hugh Dunn, an icon of West Australian brewing, and morphed into the deliciously boozy core range imperial brown ale. The Citra driven Nail Brew Log #4 became Nail Red, a beer that has defined the brewery during the second half of the decade, before evolving into the 9 percent ABV Red Carpet at GABS 2016. The tropical storm of Nail VPA roared from out of nowhere last year, quickly becoming one of Nail’s best selling beers and, as is tradition, it sported a high alcohol cape to become Super VPA for GABS 2017.

Then, in the black heart of winter 2017, Nail released what was then a yet-to-be-named New World session ale going by the working title of "Mid-E" – since dropped in favour of MVP. The beer cuts a similar path to the single hop El Dorado VPA, filling out its 3.4 percent ABV with Galaxy, Astra and Calypso hops to keep things fun and fruity. Passionfruit and mango shine while tangerine plays a supporting role to balance the tropical fruit. It comes with a firm bitterness that exceeds most in its category meaning, for many, it's exactly what is missing from the low alcohol space.