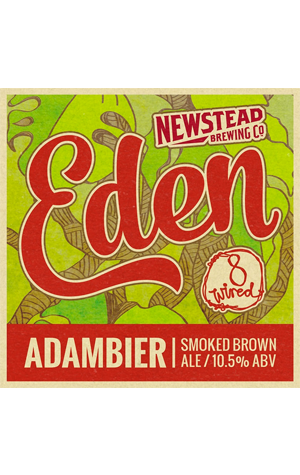 One of the many wonderful things about beer weeks is the opportunities it gives brewers to come together, share ideas and make beer. It will be happening at many breweries across Melbourne and Victoria during this Good Beer Week and happened during Brewsvegas in March. Arch collaborators Newstead invited Soren from 8 Wired to join them at their Doggett Street home to create a beer together: Eden, a 10.5 percent ABV smoked brown ale.

It is, we're told, a modern day twist on a traditional Adambier, an altbier with origins in Germany. Newstead tells us: "Like its historical cousin, this Adambier has a smoked, chocolate and spicy malt backbone with herbal and grassy hop notes. Unlike the historical versions, this interpretation was not aged in barrels and lacks both oak and brett character, which may be a good thing. She’s a snake." They say the beer has "smooth, silky mouthfeel [that] will lead you up the garden path and tempt you to take a bite."