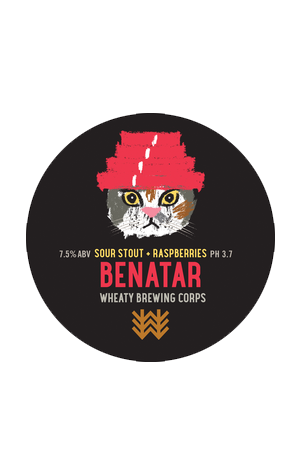 A beer brewed in honour of Emily Trott, one of three owners of the Wheatsheaf Hotel who passed away in 2016. Emily had three cats, Pablo, Little One and Benatar; hence the name and decal image for this stout. Benatar is "a good, solid name" according to head brewer Jade Flavell and is used to describe the beer in a variety of ways" Flat Benatar for pouring off the hand pump or Vat Benatar for a barrel aged version.

Benatar takes the term Sour Puss to a whole new level: a cat that doesn’t want to conform. She started out as a kettle soured oatmeal stout, had 25kg of Adelaide Hills raspberries added into the fermenter and was finished with a saison yeast.

The beers pours midnight black with a thick coffee, chocolate head. It can essentially be split into two, raspberry and chocolate. Raspberries are huge on the nose but there is also a hint of chocolate there too. It's tart on the palate but, again, the stout elements are present too, resulting a thick, decadent yet fruity and tangy chocolate oatmeal stout.