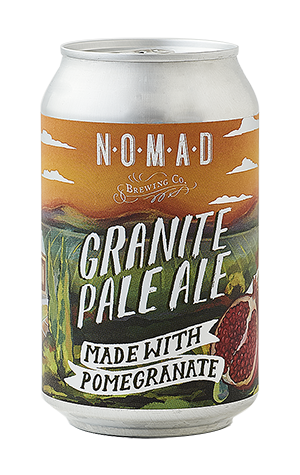 Ever since they began releasing their new beers in cans, Nomad seems to have taken on a brighter and breezier outlook; a new pale ale full of tropical fruit character; a desert lime gose; a hibiscus Berliner weisse and now this, a pomegranate pale ale.

Called Granite, the name is a double entendre referring to the granite hills of Mudgee where pomegranates were sourced before being added to this beer in three ways; the arils, the juice and a molasses. With all of that you'd be forgiven for expecting it to be like sipping on a liquid version of the fruit, yet it ain’t so. The hops – Galaxy and Summer varieties – are still very much the heroes here with the fruit merely lending a hand to help give the tropical fruit cocktail of flavours a boost. The pomegranate does add a degree of tartness before the bitterness comes rolling in, but if you didn't warn someone in advance that the beer had been juiced there’s a good chance they’ll knock it back, both happily and repeatedly, while being none the wiser.