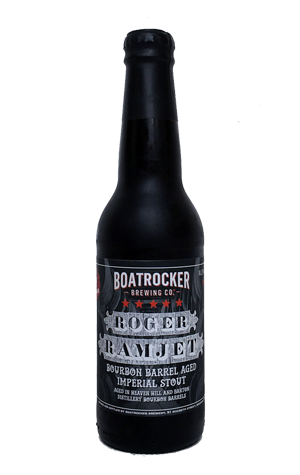 "Get the blue cheese. NOW!"

Up went the cry from The Boss as the first sniff and sip of the second vintage of Boatrocker's Roger Ramjet hit home. And with good reason too. While last year's debut of the bourbon barrel take on the brewery's flagship imperial stout (the original Ramjet is aged in whisky barrels) was a good beer – and highly fancied around the beer world – here at Crafty Towers we didn't feel it hit the heights of its sibling. But this time, well...

Roger Ramjet Mk II – again aged in barrels from Heaven Hill and Barton Distillery barrels – spent more time on oak and the result is a beer that seems both bigger and more decadent yet more integrated too. There's more juiciness from the barrel's former inhabitants on the nose, wrapped up in rich chocolate fudge, vanilla, dates, coconut and Vietnamese iced coffee, characters that continue through its luxuriant passage across your palate. There's a welcome booziness that's in balance with the other elements in yet another beer to add to the pantheon of classics from the Braeside brewery.

NB: It took us a few days to find a gap in our sampling schedule for this and we believe some stores may already be sold out – sorry!