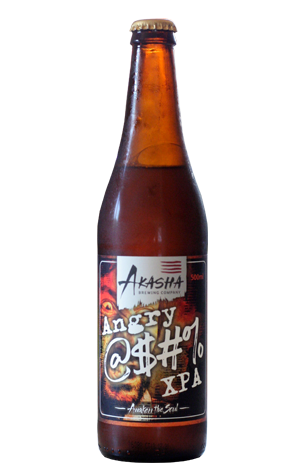 What should you do when your brewing equipment, mid brew, becomes so jammed with hops that the most likely result of your toil appears to be a ruined beer whose only fate seems to await down the nearest drain? You’d probably do what comes naturally: sweat and swear, channel your inner Hulk and let your anger loose. That’s more or less the story behind Akasha’s Angry @$#%, except, for all the distress and despair, the beer actually turned out fine. Better than fine, in fact.

It’s an XPA, the style (or non style, depending on your view) that sits in the notoriously disputed zone where pale ales end and IPAs begin. But within Akasha’s range this has more of a natural place; after all, this is a brewery following an American West Coast mantra where an IPA ain’t really an IPA unless it’s clocking in at at least seven percent ABV. With Akasha’s regular Hopsmith IPA at 7.2 percent ABV and the Freshwater pale ale just 5.2 percent, The Angry @$#% and its 6.6 percent ABV would seem to sit neatly in the slot.

As one might reasonably come to expect, considering the brewery, this is a beer rammed with American hops. It’s therefore flush with the corresponding fruity aromas and flavours and a fair whack of bitterness, all of which sits, finely balanced, atop a pale malt base. In more succinct terms it’s lean, it’s dry and its full of hop deliciousness. It’s also the kind of beer you're only likely to find fresh; like its bigger sibling, the Korben D double IPA, The Angry @$#% is a seasonal that’s brewed quarterly so it tends to get snapped up with haste. And with the latest batch having just been released, now would be a very good time to get into it.