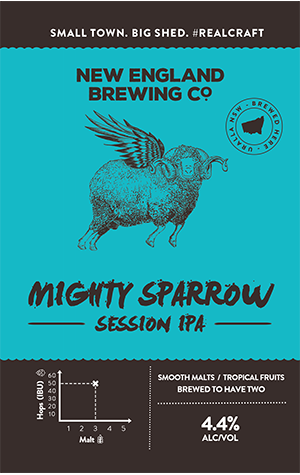 When you push play on an Édith Piaf album it’s easy to be struck by the power of that voice. What’s made all the more remarkable is that all that sound emerged from such a slight frame, a reminder that big things can and do come in small packages. With that thinking in mind – and moving neatly from one sparrow to another – New England has attempted to coax a lot from little with the release of its Mighty Sparrow.

It’s a session IPA, the somewhat murky and surprisingly divisive beer style which aims to offer the bold characters of an IPA with a more moderate level of alcohol; at just 4.4 percent this one sits squarely in the “sessionable” bracket so their version does shouldn't cause too much consternation amongst the pedants. The focus is geared towards the tropical characters of the Calypso and Topaz hop varieties – the brewer suggests mango, lychee and pine on the nose and pineapple, mango and blackberry on the palate – plus a resinous bitterness while the pilsner and crystal malts have been used to with the aim of providing a light backdrop with a touch of sweetness. For any beer ornithologists keen on spotting the Mighty Sparrow in the wild, it’s flying out to a handful of venues in NSW and Queensland now.