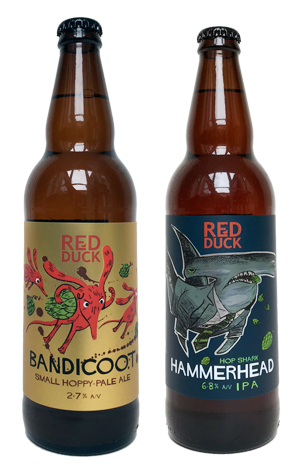 Part three of the first half of our catch up on the latest limited release brews from Red Duck features a pair of hoppier drops. Bandicoot is designed to be the brewery's beer for summer, a "small hoppy pale ale" weighing in at light beer strength for the designated driver or session minded among you. It's very pale and offers up limey and grapefruit zest hop aromas atop a beer that's light in body but relatively high in bitterness – a light IPA, perhaps?

Very much in full IPA territory is Hammerhead, a souped up version of the brewery's Hop Shark. The hops are all American – Amarillo, Simcoe, Chinook and Calypso – and, like Red Duck's original IPA, Bengal, they come with a hefty load of dark caramel and toasted malts as a companion. As for their impact on the beer, they come across in a dank, piney and earthy manner rather than anything particularly fruity or citrusy.

Available from the brewery cellar door and select VIC outlets.

Or, if you're quick enough, as part of a 12-pack special for Crafty Cabal members.