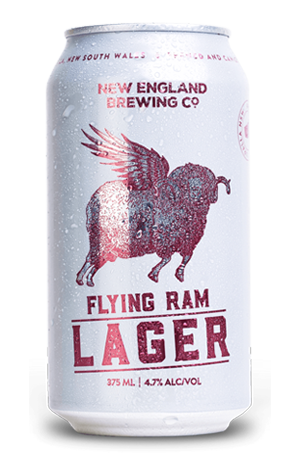 In Autumn 2016, New England Brewing released an amber lager. That release date may have meant they missed the traditional summertime sweet spot for the style, but that was never really the point. Their lager was about time, rather than timing.

Unlike so many things in this world which are all rush, rush, rush, this beer took its sweet time conditioning for several months – as traditionally lagers did and many still do (the German word "lagern" means to store, after all). It is thus, despite its amber colour, naturally a very clear beer. On the palate, its toffee malt sweetness couples up neatly with a little bit of breadiness to create a pleasant chewy character. The gears then shift somewhat, heading towards the kinds of classic lager characteristics most drinkers would expect, offering a clean, crisp and dry finish.

New England’s amber lager wasn't designed to be your typical Aussie lager and is all the better for it. And, better still, when they got themselves a canning machine in 2017 they decided to add it to the permanent range under the name Flying Ram.