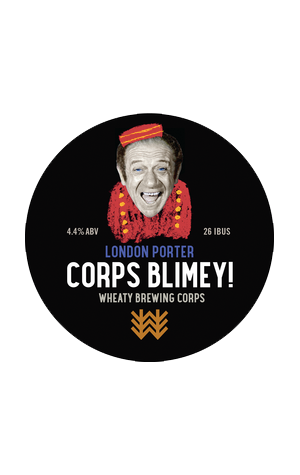 The Wheaty ladies don’t just deal with good beer, they also tend to dabble in good whiskies. And why not? After all, to make whisky, you start out as if making beer. For the Corps Blimey! London Porter, the brewpub's Brewing Corps invited in two whisky experts to collaborate: Graham Wright and Dr Paul Gooding who previously worked on the Wheatsheaf Hotel’s very own spirit drop aptly named Wheaty Whisky.

The resultant beer collab measures just 4.4 percent ABV but it is loaded with a selection of specialty malts, including brown, chocolate, Shepherd’s Delight, golden naked oats, melanoidin and acidulated. With just a single hop added, the focus here is all on the malt, as it should be for such a beer.

And, cor blimey, guvnor... The final product opens with a chocolaty blast hitting the nostrils and palate, followed by flavours of biscuit, toasted malt and a little sweetness that linger.