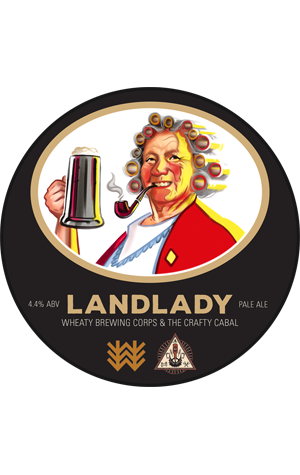 When The Wheaty launched its brewing arm, a very generous offer was extended in the direction of Crafty Towers, asking if we'd like to make a beer with them at some point. Given they've brewed with some of the finest brewers locally and from New Zealand, Europe and the States – and we once asked Murray's to put peated malt, Belgian yeast, mussels and oysters into an imperial stout – this was beyond the call of duty on their part. But, with our reader subscription service, The Crafty Cabal, up and running and unable to resist such kind offers, we gleefully accepted and brought four of our supporters along for brew day.

While The Wheaty has been known to brew oddities – a series of anchovy beers, a blue ale (that turned out purple) – we'd been missing the simple pale ales we'd grown up with on the other side of the planet so, while it wasn't necessarily that Wheaty a thing to do, we opted to brew an English pale ale with traditional ingredients.

It was tapped at a Cabal launch party – and tapped three ways too: "straight" from the keg, via the Glasshopper filled with more hops, and from a cask dry-hopped with Tassie Cascade (there's a second cask with Tassie Willamette around too). And, while it's a little fruitier than we expected thanks to a lively liquid yeast the brewers hadn't used before, it's most definitely English. Pouring a glowing copper, there's floral and orange citrus hop aromas alongside some sweet biscuit malts, heaps of orange marmalade flavours and a bitterness that's drying more than a standout feature.

Jade has suggested they'll tweak it and brew it again – and it's encouraged them to start playing with casks more too. As for the name (and decal), it's a nod to the classic Timothy Taylor Landlord English pale ale and to the all female owners at The Wheaty. Cheers!