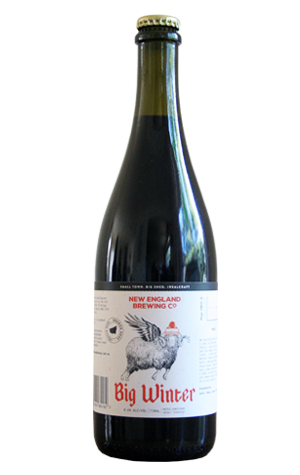 The label of New England’s Big Winter 2016 states that it’s a beer brewed “to celebrate frosts, snow flurries and the smell of wood fires”. While that may be fine for Uralla, at the time of the beer’s release some parts of New South Wales were closing in on their highest July temperatures for decades. Fortunately, at least the evenings remain, for the most part, cool enough to make conditions nigh on perfect for a beer like this.

Big Winter is a Belgian-style strong ale and it’s utter sweet relief for any qualms you might have about cool conditions. As is the case with New England, the beer has been open fermented, this time with a Belgian Abbey yeast, which tends to add an interesting extra dimension in itself although here it doesn’t seem to openly underline its contribution. Rather, drinking a bottle of Big Winter is like having a dessert trolley roll past you: first comes a serving of toffee, then a big course of raisin and dried fruits, followed by a dash of vanilla.

For a lusciously dark, sweet and strong beer, all the flavours are well integrated and you don’t necessarily get fatigued by it. Indeed, packaged in a big 750ml Champagne-type bottle the recommended serving style is “share”, though you ought not feel too guilty if you decide to keep it for yourself.