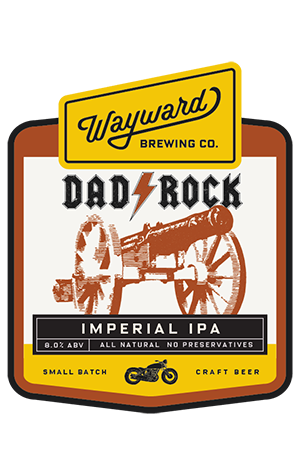 There’s a small but slowly growing number of gluten reduced beers to be found in Australia but it’s hard to imagine there are any others as ballsy as Wayward’s Dad Rock double IPA. However, when the beer first came out, around the middle of 2016, it was as worrying for coeliacs as most any other beer.

Named for a Spotify playlist of classic bands that was popular with the Wayward brewers at the time – think along the lines of Skynyrd, Creedence and The Eagles – the original Dad Rock was as radio-friendly a double IPA as you might reasonably hope for. It came at you with big licks of pine and stone fruit – courtesy of the American hops – while the malt section kept things in time and prevented the hops from totally stealing the limelight. At eight percent ABV, it was pretty showy but so full of sweet hooks that you couldn't help but come back for more. Basically it was a big and bold beer that would be digestible to the masses. And, as of the end of 2016, it became digestible for the gluten intolerant too.

How it did so, in simple terms, was thanks to an enzyme called Brewer's Clarex which goes around gobbling up the molecules coeliacs find so troublesome. Importantly, it meant that rather that having to use a gluten-free grain like sorghum or rice, they could keep using the same barley and wheat as the previous incarnation, meaning the taste wouldn’t be affected. Alongside that, they took the opportunity to change the yeast to a Vermont IPA variety that would give more body and tropical hop character.

When the rejigged version was sent to a government testing facility, the gluten levels came back as “not detected”. That’s possibly not endorsement enough to have the most susceptible people diving into a growler without properly looking into the finer points, but it does mean that there’s now a big, hoppy beer on the Aussie market that’s going to please a lot of gluten intolerant people. Not to mention everyone else.