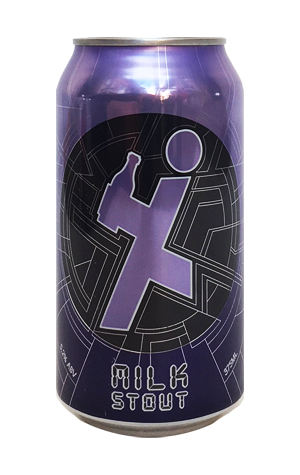 The third beer ever released by Frase and Grum Exit, AKA #003, was a Milk Stout. And that's also the style they've opted for to make up the third beer in their core range too – following an IPA and hoppy amber – now that they've got more room to play with as house guests at Kaiju! in Melbourne's south east.

For those new to such things, a milk stout is a version of the dark, roasty drops popularised by Guinness into which brewers add some lactose (milk sugar) during the boil. These sugars don't get gobbled up by the yeast and thus stick around to add an element of creamy body and sweetness to the finished beer.

But don't, in this case at least, go expecting something overtly sweet or rich – this is no GABS entry aiming for dazzlement over the course of 85ml. Instead, the lactose acts as a softener for the roastier characters of the nigh on black beer, resulting in a beer we wouldn't put smack bang into "sweet stout" territory so much as simply "stout" territory, mixing elements of espresso, roasted barley, dark chocolate and an earthy bitterness with that smoothing, subtle sweet touch.

The beer made its latest move in winter 2018, joining the rest of the Exit core range in transitioning to cans.