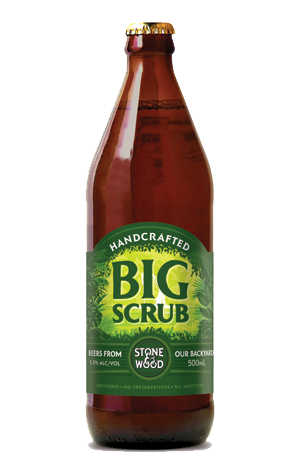 When up in Byron Bay earlier this month, there were a few new, yet-to-come and probably-won't-be-seen-widely things to spy and sample along the way. There was Baltic porter on tap in the morning, a pilot batch Belgian tripel and new Fixation beer still in tank, the brewing of this year's Stone Beer and hints of new projects of a more physical nature. But they managed to keep Big Scrub quiet (unless we weren't listening at that point) despite the fact it was ready for release.

It's the latest in their occasional Beer From Our Backyard series, which was launched by Cloud Catcher. Again, as well as putting forward a typically approachable Stone & Wood beer, it comes with a message. This time, it's "a reminder to preserve the natural beauty of our backyard", in this case, the one percent that still remains of the natural rainforest on their doorstep. Indeed, it takes its name from Big Scrub Landcare, who work to protect and regenerate said rainforest.

As for the beer, they're calling it a "new age lager", for which you might read India pale lager: a beer that is much hoppier in aroma and flavour than most lagers, albeit with a bitterness that's reasonably punchy but restrained compared to that which some IPLs display. Those hops come in floral, tropical and grassy aromatic forms, while the beer itself is smooth and rounded, with some lemon citrus flavours joining in the fun too.