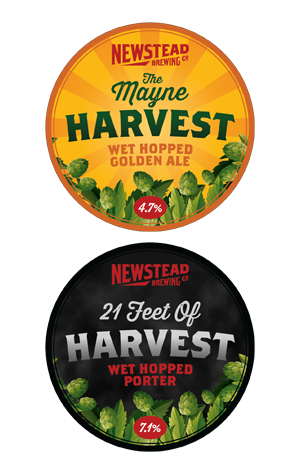 Given they're in Brisbane, rather a long way from the ideal conditions for growing hops, it's not that easy for Newstead to brew a wet hop ale. [For the uninitiated, these are beers brewed with hop flowers that are taken straight from the bines upon which they grow to the brewery without going through the usual drying process.] However, the tyranny of distance didn't put them off; in fact, they went and brewed two different wet hop beers just because.

Both are variations on beers from their core range: The Mayne golden ale and 21 feet 7 inches porter (now The Mayne Harvest and 21 Feet of Harvest). In the former, they used 30kg of Galaxy, Ella and experimental variety HPA-035 as well as the usual dry hop addition the beer receives and tell us that this gives the ber a "vibrant sting of plant, melon, passionfruit and lime pepper" as well as an oilier mouthfeel and greater perceived bitterness.

The same hops were added in the whirlpool to the porter, meaning that its usual malt complexity is enhanced by "melon and tropical fruits". Just a few kegs of each in circulation (and not all listed venues have both).

And other craft beer venues in SE QLD