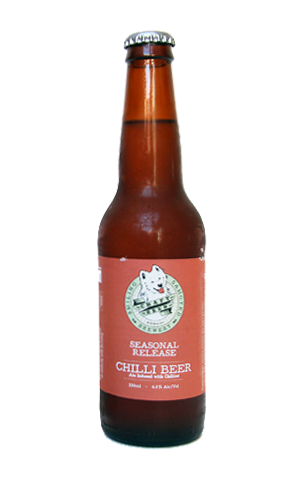 When Simon Dunstone and Kate Henning took over the former Myponga Brewery, one of the beers on the existing lineup was a Chilli Beer. It had a loyal following so the couple felt it should continue in some form. It does so still as an annual seasonal release, albeit reinvented.

Such beers do tend to crop up with surprisingly regularity at regional Aussie breweries yet, while we've enjoyed a few chilli chocolate beers and few dishes are prepared at Crafty Towers without at least four or five forms of chillies and pepper, when they're presented in a paler beer there's something inside that warns: "Are you sure about this?"

Thus it was with a little trepidation that a bottle of 2016's Smiling Samoyed Chilli Beer was poured. Yet soon the glass was being passed to Mrs Pint with a nod and a: "You know what? Give it a go." In the world of chilli beers, this is presumably what brewers are aiming for: there's a big capsicum perfume that hits you first, before the soft, sweet malts arrive to calm any pre-flight nerves. When the spicy heat hits, it does so gently – at least at first – before building into quite the back palate fondler, leaving you in no uncertain terms that chillies were harmed in the making of this beer, even though you, the drinker, survives unscathed.