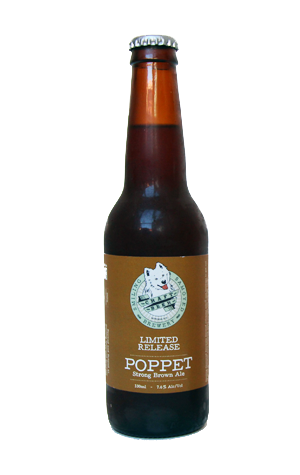 Be honest. If someone told you they were going to serve you a beer called Poppet, you'd be inclined to expect something light and delicate, fruity maybe. If they told you it was named after a pet Samoyed, that would only send you further down that road. Yet the annual Poppet release from South Australia's Smiling Samoyed is anything but light, delicate, fluffy and fruity.

Instead, it's another of brewers Simon and Kate's forays into the world of malt, something they've done so well in the past with their trophy-winning Dark Ale and last year's enjoyable seasonal ESB. This one is the largest of the lot, a strong brown ale that declares itself as a veritable mountain of malts from the moment you pop the top (complete with Samoyed smiling back atcha).

There's all manner of rich toffee and cake batter action within its chestnut brown liquid, plenty of sweet dried fruit too. The alcohol does poke its nose through, although not with any attendant off-putting heat, while there's a toasty bitter denouement that keeps the mountainous malts from becoming cloying.