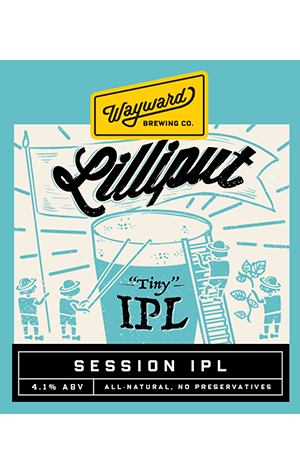 Some time around 2012, before the whole "session IPA" idea had really caught on locally, Wayward released a low alcohol but very flavourful India Pale Ale which they gave the cute name of Tiny IPA. If memory serves, the idea behind that beer was that founder and then gypsy brewer Peter Phillip liked to go out sailing and enjoy a beer or two while still being able to tell port from starboard. With low ABV and hop forward flavours, it was a rather delicious drop and would have suited its ocean-going role just nicely. After being cast adrift from the Wayward range for around three years (during which time we assume Pete hasn’t had time for a lot of boating) the Tiny IPA has finally returned, but it’s no longer an IPA.

Under head brewer Shaun Blissett, the beer uses the same recipe except for the fact that it’s now fermented with a lager yeast rather than an ale one. Hence we have the Tiny IPL. The hop character – a blend of US and Aussie varieties – is still there, punchy and fruity as ever on the nose and offering up a good amount of bitterness. The lager yeast has helped give it a slightly leaner and cleaner finish that, if anything, makes it even more satisfying to drink than its predecessor. At 4.1 percent ABV you wouldn’t put it in mid-strength territory but for its size you can see why it’s been nicknamed Lilliput, being a giant in a small world.