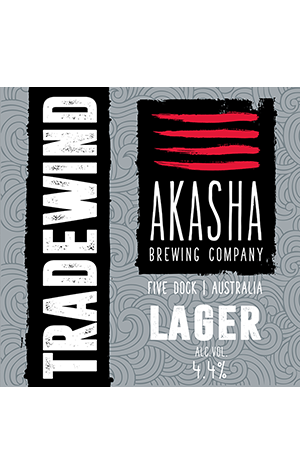 Of the beers that form Akasha’s core range, you’d have to say Tradewind is the surprise package. Brewer Dave’s preference for hop-dominant beer styles is well known so it’s hard to imagine a lager having formed an important part of the brewery’s plans. And it may never have were it not for the team making the effort to ask what kind of beer their customers – in this case publicans – would like to see. The resounding answer was a craft lager, thus Tradewind became the first new beer to come from Akasha’s own brewery and, proving publicans tend to know what they’re talking about, it has gone on to become the brewery’s biggest-selling beer.

It uses a European lager yeast and is brewed in a manner befitting the style, which is that it is left to lager (condition) for several weeks. Being left alone with plenty of time to settle, there’s no filtering done but you still end up with a naturally clear beer. While that’s all very traditional, Dave couldn’t help himself and has hopped the bejesus out of it too. A bucketload of Galaxy hops were added which gives it a real passionfruit and citrus punch, though the low alpha acids of that hop variety means it’s still low in bitterness. Made with pilsner malt, and a touch of crystal malt for sweetness, Tradewind finishes a little dry which just keeps you wanting to come back for more.