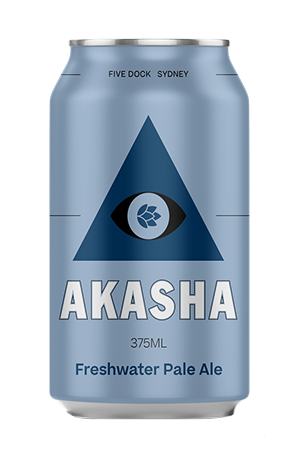 When the Freshwater pale ale was launched in April 2015 as Akasha’s first beer, you could say there was a certain weight of expectation. Dave had forged a reputation for brewing fine beers, but Akasha was new and unproven. Every Sydney beer geek from Bondi to the Blue Mountains would be watching and waiting to see what this new brewing company could do. And what they were met with was a face full of hops in the form of the Freshwater Pale Ale.

This American-style pale plies its trade mainly on the back of US Cascade hops which offer up big citrus fruit aromas and flavours. Yet despite the way those characters meet you head on, it was made to be approachable enough so that even the average person that had never tried a hoppy beer in their life could take a sip and like what they tried. When Akasha opened its own brewery and the beer began to be produced on new equipment, the recipe was massaged ever so slightly from that which had been brewed gypsy-style. The main differences are that the malt bill was tweaked to lighten up the colour and some of the bitterness drawn back. Being the company’s first beer, much depended on the success of Freshwater and it certainly stepped up to the plate, becoming the backbone of the business through most of Akasha’s first year.