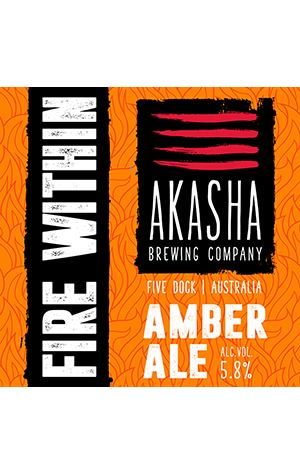 Each of Akasha’s four core beers have been created to represent one of the four key elements. Hopsmith is earth, Tradewind is air, Freshwater is obvious and that leaves us with the Fire Within. So why should Akasha’s American amber ale be considered the fiery one? Perhaps it’s something to do with malts being dried in a kiln and this is the maltiest beer of the range. Perhaps it’s a reference to the beer’s roaring copper colour. Perhaps it’s a metaphor for the fervour that burns inside the brewer, or the claim that it’ll ignite your taste buds. Perhaps beer is art so you can interpret it as you see fit. In all honesty, it wouldn’t matter if it was named after an element like boron or manganese. It would still be a cracking beer.

It’s plenty hoppy, but no one trick pony. The key to the Fire Within is the way in which it balances all those hops with the malt. Several are used, key amongst them crystal and light and dark biscuit varieties. They’re responsible for the beautiful colour, the smooth caramel sweetness and the all-round richness. Perhaps the amber ale got the fire element because it’s just that flaming good.

NB: In 2020 following the brewery's rebrand, Akasha let Fire Within burnt out of their core range.