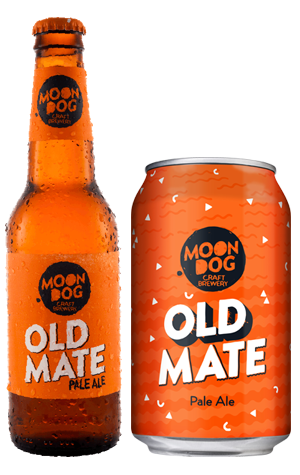 More than four years after launching with beers such as a Cognac barrel-aged double IPA and a cherried, barrel-aged sour black ale, Moon Dog entered the fray in the most densely populated part of the Aussie craft beer world: the hoppy, pale, around 5 percent ABV ale arena. And they did so with a beer that was very hoppy, not as pale as some, but very much 5 percent ABV.

At launch, Old Mate became part of the Abbotsford brewery's trio of six-packed core beers, alongside Love Tap and Mack Daddy, bringing some eye-catching, borderline neon orange – plus what appears to be a Bandido lemur in spurs – to the party. Since then, Love Tap has been retired and replaced with the more traditional Lager, while Old Mate has gone on to become one of the beers driving the brewery's rapid expansion.

The beer has evolved a little too: ostensibly an American pale ale, but one that's toned down some of the brasher elements of the earlier days in favour of relatively gentle orange citrus and peachy hops alongside some light caramel sweetness and a bitterness that's more balancing than biting. It's an evolution that's made it more of a by-the-pint pale than it was, while it's also available in cans as well as bottles from September 2019 onwards.