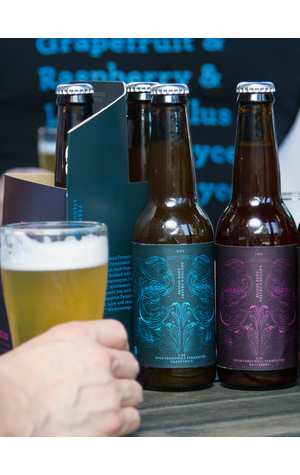 Tis the season of the Berliner Weisse. And why not, as when done well, there's little more suited to a hot Aussie summer (or refreshing one's palate mid sampling session). One of the first brewers to play around with the style here, Darren Robinson of Doctor's Orders, has joined forces with one of the country's foremost collaborators to create not one, not two, not three, but four of them.

The original Berliner Weisse (whose few remaining brewers must be looking at what's happening globally with incredulity) are often served with flavoured syrups, hence why local brewers have been keen to add fruit and other flavours to theirs, be that Feral's Watermelon Warhead, Boatrocker's Miss Pinky or the current releases from Blackman's / 3 Ravens and Mash Brewing.

Here, the partners in lacto are doing just that, taking the base beer and releasing it four ways. There's the original, untreated beer then three blended with rhubarb, raspberry and grapefruit. The base beer was made using a sour mash process where the wet mash was allowed to stand for 48 hours to allow some wild fermentation and natural souring. Then the brew was continued and the partially fermented wort was boiled and transferred to the fermenter. A combination of Brettanomyces, German ale yeast and Lactobacillus was used to finish the fermentation before the fruits were added.

NB: Both The Local Taphouse St Kilda and the Alehouse Project are getting complete sets of four that will be tapped simultaneously on January 13.

NB II: There's a new batch of Bling Bling DIPA out and about too...