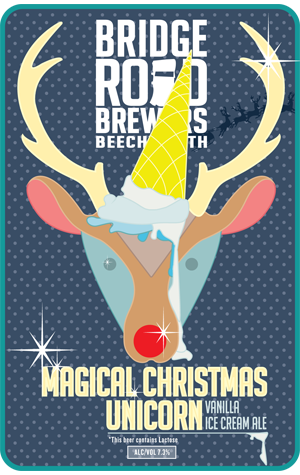 Not content with creating a 24 beer advent calendar with a bunch of his Aussie brewing peers, Ben and his team at Bridge Road have gone and created a Christmas beer too. Originally conceived for last night's Grain Store Christmas dinner, the challenge was to create a beer for dessert. The challenge was also given to Modus Operandi, who came up with a spiced pudding porter. With the Bridge Road offering a vanilla custard / ice cream inspired affair, the two beers were served together.

As a standalone, this offering – the Magical Unicorn – was brewed with lactose (the milk sugar that has been quite the understated star this year, what with it appearing in Moon Dog's popular Splice IPA as well as in the usual richer, darker, sweeter candidates) but at a level in which its sweetness is "subtle enough to be a quaffable summer beer but still remind you of a Dixie cup." Maybe you could pour it over a Dixie Cup for next level refreshment...

NB Bridge Road has also recently released a version of Lemon, Lime & Bitters in which the bitters are provided by hops. We mentioned it in a newsletter recently but hadn't added to the site, but if you're looking for a non-alcoholic yet hopped up drink for the holidays...