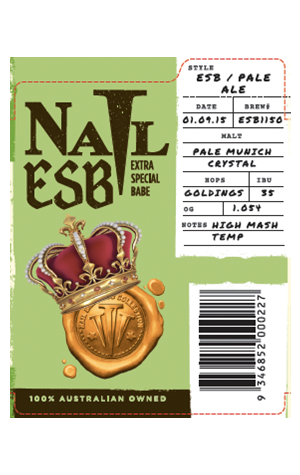 With its rebrand done and dusted, it's back to releasing new beers for the Nail Brewing crew. The penultimate new brew for 2015 from the WA brewery is an ESB and it's appearing on tap and in bottles as the eighth beer in the Brew Log series. A rather more traditional follow up to the hugely popular, quirky and trophy-winning Flaming Lamington, this one an Extra Special Bitter inspired by those you'd find in the UK.

We're told it's refreshing and thirst quenching and comes with "strong fruity aromas and rich malt balanced with English Golding hops." And, as with all Brew Log Collection beers, it's dedicated to someone very important to Nail's founder John Stallwood, in this case his partner Cindy.

Looking ahead, the final Nail release of 2015 will be a keg only affair called Summers Best that they're calling a "session pale ale". It should be out in the middle of December.

And other good beer stockists in WA