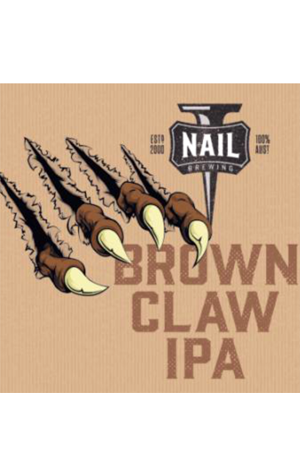 Happy accidents can be a fine thing. We may not have microwaves if a chocolate bar hadn't melted in the pocket of an engineer as he walked past a magnetron. Coca Cola originated from a medicine for headaches that was accidentally mixed with carbonated water. And would a whole subculture of art and music have come about if Albert Hoffman hadn't accidentally ingested an experimental compound while working in his lab only to find things getting decidedly odd as the day wore on?

Certainly, if a batch of beer originally intended to be a previous vintage of Nail's Clout Stout had turned out as brewer John Stallwood intended, there would have been no trophy-winning Clayden Brew imperial porter. So he'll probably be hoping for more of the same from the Brown Claw IPA. Originally intended to be a black IPA, the beer instead came out dark brown so a brown IPA was born. Crammed full of American hops (Chinook, Simcoe and Jarrylo) balanced with "ultra smooth chocolate malts", it's the latest keg only release from the WA brewer and, apparently, its Halloween beer.

"But," they tell us, "to hell with pumpkin beer, bring on the hops and dark malts!"