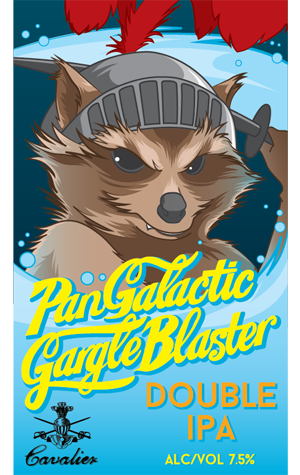 In The Hitchhiker's Guide To The Galaxy, the Pan Galactic Gargle Blaster is described as the "Best Drink In Existence" and similar to "having your brains smashed in by a slice of lemon wrapped round a large gold brick". Now, while we're not saying the latest collaboration to come out of Cavalier's brewery is going to have quite that impact, it's certainly a big mother of a beer.

Sure, at 7.5 percent, it's far from the biggest double IPA you'll come across in terms of booze, but in terms of giving your palate a workout it leaves little in the ring. It's a combo of rich malts and big American hops (mainly Cascade) as imposing as Megadodo Publications' 30-storey HQ on Ursa Minor Beta: blood orange in colour with the faintest of hazes that combines apricot, grassy and tropical hops with caramel and sweet alcohol before signing off with a big, lingering piney, herbaceous and resinous hop bitterness. Like a rendition of Vogon poetry, not for the faint at heart.

And other good beer stockists in NSW, QLD, SA and WA