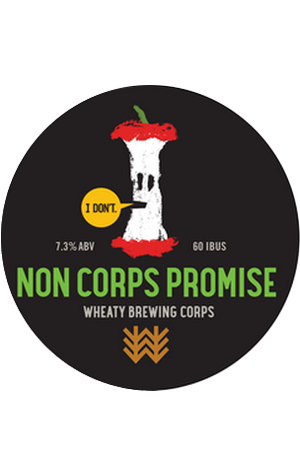 So for the Wheaty Brewing Corps’ first Birthday, and quite possibly every Birthday to follow, we’re going to take Corps Promise and break it; in the best possible way. This year we’ve brewed a supercharged version: bigger, boozier, hoppier and altogether less subtle than the original.

More Corps for your Promise.

Non-Corps Promise is a hoppy, spicy and bitter Rye IPA with big tropical hop aromatics and a dry, piney twang to finish. We used the same Malt Bill as Corps Promise (just more of it), a similiar Hop charge (lots more of it) and enlisted yeast US-05 to give us a drier finish and accentuate all that Hop and Rye character. Trust us...