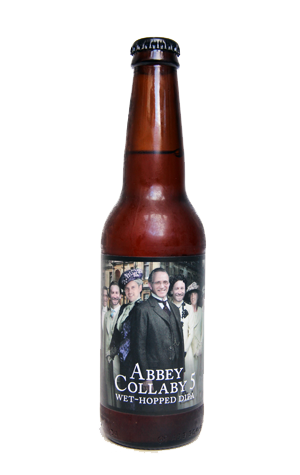 The launch of the Abbey Collaby has quickly become a Good Beer Week institution, enticing massed crowds to Mountain Goat on the Wednesday night for a first taste of whatever concoction the minds at Goat, Moon Dog and Matilda Bay have come up with. In 2014, a rather drinkable 10.5 percent barley wine ensured that some of the attendees knew they'd had a night out. So, in 2015, they toned things down. And brewed a rather drinkable 10.3 percent double IPA. And put a keg of the barley wine on for good measure...

For the DIPA, they were able to use wet hops delivered to Moon Dog's brewery soon after picking by Hop Products Australia, with Bintani, Graphix, O-I and Plasdene Glass-Pak also coming up with supplies free of charge to maximise the profits that will go to charity. On that note, one of the participants tells us that once this batch is sold, the total donation to Collingwood Children's Farm from the five collabs will be in the region of $45,000. Not bad at all.

The wet hops featured are three of Aussie's latest: Galaxy, Enigma and Summer. They're responsible for the soft tropical and berry aromas emitted by the full, foamy head atop this slightly hazy pale copper beer, alongside a touch of sweet, spicy, jammy booze. It's surprisingly lean on the palate for its size, with slightly resinous hops to the fore again, a slow-building warmth and more hops.