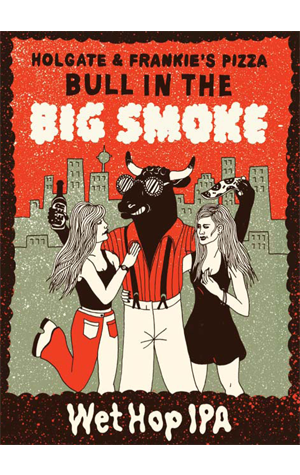 A wet hop beer, an IPA and a collaboration all in the one beer: it's a veritable beer trend extravaganza! Bull in the Big Smoke sees one of the elder statesmen of the Australian craft beer world, Woodend's 15 years-and-counting Holgate Brewhouse, join forces with one of the liveliest new recruits to the craft beer-pouring world, Sydney's raucous rabbit hole of a venue Frankie's Pizza.

At the heart of their joint effort are hops, fresh hops plucked from the recent Aussie harvest and rushed into hot, steamy wort at Holgate as soon as was humanly possible. They are of the Galaxy and Vic Secret varieties – both punchy and pungent – and have been put to work creating an IPA. According to the team behind it, the beer is a combination of "golden malts, powerful hops and fierce conviction". You can put the claim to the test by hunting it down in bottle or draught form.