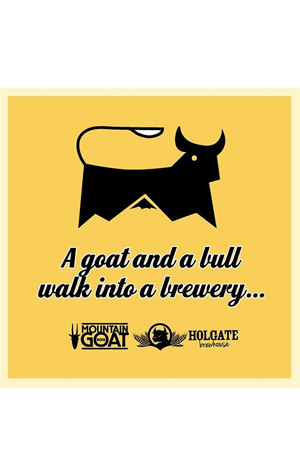 Aside from Grand Ridge, Mountain Goat and Holgate Brewhouse are the longest established Victorian microbreweries. The former turns 18 later this year, while Holgate is well into its 16th year. And now the combined 30-odd-year-olds have joined forces for their first collaboration, a collaboration based around their first beers.

Goat's first beer was the Hightail, while Holgate launched with an ESB and White Ale, the latter based on Hoegaarden. And, as the name suggests, it is the Dutch-inspired brew that they've looked to combine with Hightail. Paul Holgate says it's a "hybrid of a hybrid" and explains how it came into being thus...

"It was all a bit of a muck around: old mates trying to work one of their original recipes into a morphed sort of thing. Along the way this mongrel was twisted and turned, the Belgian witbier yeast was replaced 'off the bench' by another Belgian yeast, the citrus peel replaced by seasonal mango through the hopback while the malt bill reflected some crystals reminiscent of Hightail, adding depth and complexity…"

He says he spent 90 minutes processing the mangoes for the brew, which was carried out by Goat founder Dave Bonighton with the Holgate crew, and as for how it tastes... "Pretty damn good," he reckons.