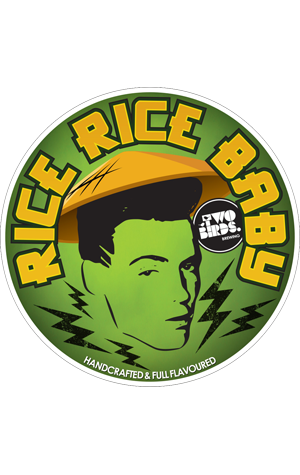 The year 2015 is shaping up to be the year of the humorous and punny beer name for Aussie brewers. We've had the likes of Full Metal Anorak, Stupid Sexy Flanders and Bad Boy Bubbly in recent weeks and now the Two Birds are at it. They've created a new beer to be launched at their Craft Beer Rising party on February 28 (then go out further afield beyond that) called Rice, Rice, Baby – complete with cartoon Vanilla Ice on the decal.

There's no vanilla. No ice. No mid-brew change of direction from faintly loveable, hip hop buffoon to dreaded wannabe rocker. [Um, where's this write up going, Crafty?] What there is is rice, as this is a beer created in loving tribute to Two Birds Nest's near neighbour of Footscray, the heart of the Vietnamese community in Melbourne.

Say the Birds: "The fresh flavours of their cuisine, which we enjoy as a weekly ritual, inspired us to capture the delicate flavours in our latest, fun, Speciality Brew. We used flaked rice for crispness, then added Sorachi and Motueka hops to contribute lemongrass, citrus and coconut notes. We also added ginger, lemongrass, Vietnamese mint and Thai basil to round things out. The beer is subtle, restrained and spicy."

They'll be pairing it with specially designed dishes on the launch day too.