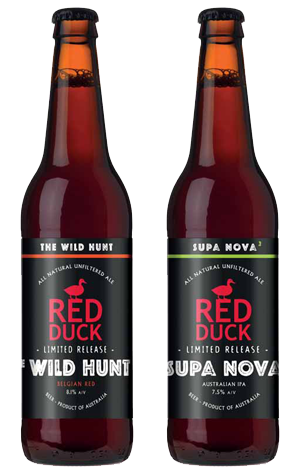 We're in danger of being overrun here! It looks like another clutch of Red Duck's early summer seasonals is about to appear in specialist bottleshops and we hadn't got around to listing the last two from the bumper pack of samples the brewery sent to Crafty Towers the other week. So before we find time to tuck into Bandicoot and Lapin, we'd best get things up to date.

This pair features one brand new beer and one that's returning from 2013. The former is Wild Hunt, a strong Belgian ale that comes with a suitably epic Red Duck tale. "Wild Hunt is an ancient European myth about a group of spectral, God-like, huntsmen, with horses and hounds in mad pursuit across the skies," say the brewer's notes. "Mortals getting in the path of, or following the Wild Hunt could be kidnapped, possibly never seen again, or would be compelled to join the Wild Hunt for eternity." This attempt to capture the excitement of such an event does so without being in any way wild in the yeast sense, instead plumping for lots of rich, ruddy malts and a Belgian yeast that combine to offer up characteristics such as raisiny fruits, soft cinnamon and marzipan, a touch of sweet alcohol and some bite at the back. It's the closest thing to a Christmas ale they'll be putting out, they tell us.

The Supanova 2 is the return of the all-Galaxy Aussie IPA first released last year. One of a handful of hop forward beers from the Ballarat brewery this season – it's what the peeps want, apparently – it uses nothing but Galaxy flowers, all added late for minimal bitterness, maximum flavour / aroma impact.

And other specialist beer venues