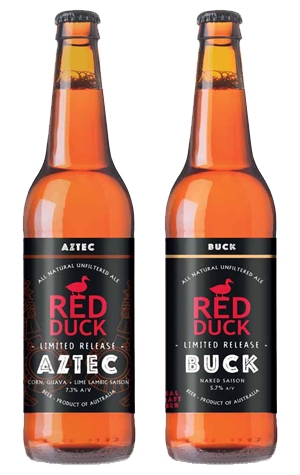 Not only is it tricky to keep tabs with how many beers Red Duck releases (OK, we ran an article last week saying they're up to 97 unique brews so that's not strictly true) but now it's becoming hard to keep up with how many saison variants they've put out. There was a run of them a few months ago – straight, honeyed and so one – and now there's a couple more.

First up is the Aztec, a hybrid of Belgian lambic and French saison, with added ingredients inspired by, you've guessed it, the Aztecs. As far as we're aware, brewer Scott Wilson-Browne has resisted using the plants and fungi that gave the ancient civilisation some of their grand visions and instead used corn, lime and guava to give the beer "crisp, dry lime notes, with a subtle hint of bitterness, and touches of guava". He describes is as "complex, hectic, loud and busy in the middle, but calm and quiet on the edges" (on second thoughts, maybe he did use those plants...) and says it's "proof that you don’t have to sacrifice flavour when its hot to get a perfectly refreshing beer."

As for the Buck, a "naked saison", things are rather more straightforward. No additional ingredients, nothing fancy or out there, just a saison he says has a soft spiciness and is "an easy drinking farmhouse style ale."

And other regular Red Duck stockists