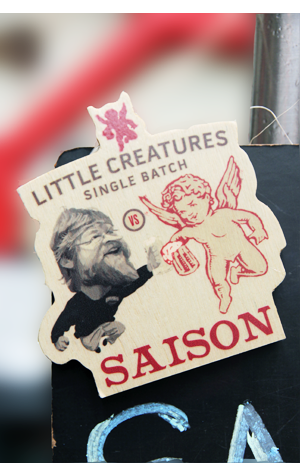 Back in August, we ran a story on the collaborations taking place between Little Creatures and Emerson's, the trans-Tasman breweries taken into the Lion family in the past couple of years. A collaboration took place on either side of The Ditch and the first of those to hit Aussie taps is this Saison. The challenge from Kiwi brewing legend Richard Emerson was to brew a traditional saison, which the Creatures crew did via the means of a French saison yeast and a touch of their beloved East Kent Goldings hops. The result is a hazy yellow orange beer with a suitably saison-like white, foamy head from which comes rounded spicy aromas and a touch of banana. The taste is rather different, with some citrus peel amid the malt sweetness that's soon replaced by a tart dryness.

The beer was supposed to be out in bottles as well as kegs but will now only appear in the latter. And rather than pretend the bottles were never going to happen, the guys at Creatures asked if they could explain why. According to head brewer Russell Gosling, they carried out all their usual tests on the beer to calculate at what point fermentation would stop and in the maturation tank it did exactly as expected. "Things looked sweet as," he says. However, when they transferred some of the batch unfiltered into bottles at a slightly lower level of carbonation than usual (10 percent less) to allow for "creep" – in other words, further activity from the yeast that would create more natural carbonation – and placed it in their incubator at 30C to simulate the ageing process, the yeast unexpectedly continued to "chomp away".

"The bottles in the warehouse [that haven't experienced accelerated ageing] are all fine," says Russell. "But there are three things we can't control [once the bottles are in the market]: temperature; how long someone will keep it before drinking it; and handling.

"Due to the fact that we have no control over these parameters in the market we do not know when the stock will hit the critical carbonation point; thus we have decided to not release to market to ensure consumer safety – we don’t want to release any potential hand grenades!"

Which seems fair enough. Who wants exploding saison all over their house?