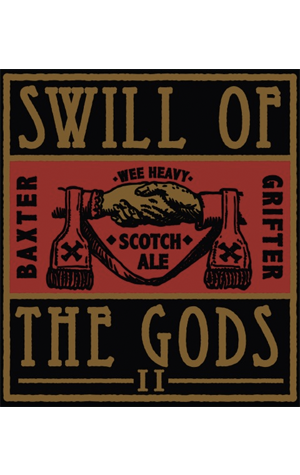 Things tend to be a bit easier the first time around. Come up with a good idea, do it well and people will more than likely respond favourably. Not so with sequels. The preconception, expectation and anticipation can be the fast route to a road to ruin, littered with failed follow-ups and haunted by the cast of Teen Wolf Too. So it takes a certain gumption to not just dwell on past success but take the original idea and improve on it. Which brings us to the Swill of the Gods II.

Last year the Grifter Brewing Company teamed up with the folks at Sydney small bar Baxter’s Inn to brew the original Swill of the Gods. That was a Scotch Ale which ran against what the brewers had been doing with highly hopped beers in that it focused on the malt profile. Swill the Second, which was launched as one of many collaborations at Frankie's "Swillhouse" event on Monday night of Sydney Craft Beer Week, does much the same, but it’s gone all Terminator II: Judgment Day in that it’s now bigger and more dangerous. The alcohol has been bumped up from five percent to a hearty seven percent but, crucially, the brewers have been able to maintain the drinkability. The secret is all in the malt which disguises everything in luscious bready and biscuity notes with the sweet characters of toffee and raisins. With a few notable exceptions, local interpretations of Scotch Ales are reasonably rare which makes Swill of the Gods II a welcome second coming.