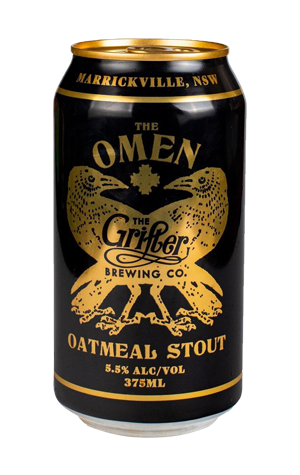 At times in the craft beer world, there seems to be a race on to brew the most out there beer. These are almost always unique and feature something done to the maximum degree, whether it be enamel-stripping amount of hops, spirit-like levels of alcohol or barrel-aged in a Trojan Horse - you name it, someone will be trying it. But running in parallel to this extreme movement, there also seems to be a growing call for 'sessionability'. It's basically the idea of beer that's jam-packed with interesting flavours and fairly low alcohol. In other words, a nice beer that you can have a few of. And that's exactly where The Omen oatmeal stout fits. It uses six different types of malt which give several different layers of chocolate and coffee characters. On top of that is the addition of oatmeal which adds a certain creaminess and fullness to the rest of the malt-driven profile.

While these kinds of beers never seem particularly fashionable, they have a loyal following which demands they stick around. Just as well they kept it around too: in 2018, five years after it was first released, The Omen won Grifter their first trophy, collecting Champion Porter/Stout award at The Indies.